Me & John Oliver are Out to Save Net Neutrality

UPDATE – in between the time I started working on my rant for this week about how to save net neutrality, and the time I actually put pen to paper, the FCC, that grossly idiotic government agency run by the HCIC (head clown in charge) Pai, decided to use the Sunshine period rules to keep people from being able to comment further on this issue.

Seriously, what the heck is that about?  Suppression of the voice of the people.  Again.  I don’t care what political party you happen to like, I know that you don’t want to pay double for your Duck Dynasty OR your Game of Thrones.

That doesn’t mean that you can’t express your displeasure (about saving net neutrality or anything else) by contacting your elected representatives directly.  They are perhaps, a bit more sensitive to your comments than a guy who was appointed to do a job and not elected.

Here we are, another week, me complaining about bulls**t on the internet.

I talked about how we need to save net neutrality (again) last week – and while I was blabbing on my own site, I didn’t realize that sneaky devil John Oliver was one-upping me, on national TV, no less! 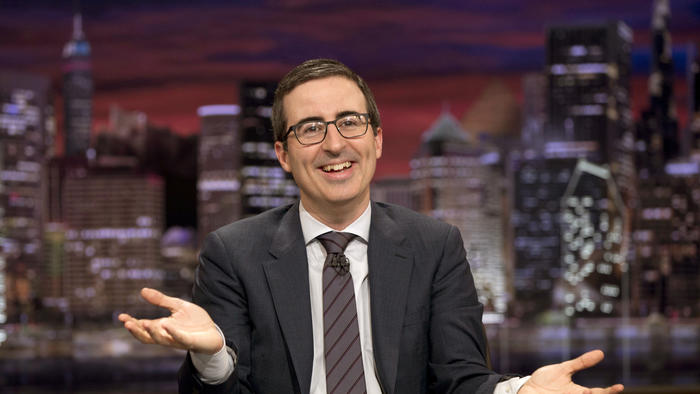 You don’t know John Oliver?  WHAT?

If you’re not familiar with John Oliver, and his very real, very successful attempt to save net neutrality some years ago, let me tell you how it went.  Way back in June of 2014, the FCC was messing around with some new rules that would have limited the ability of the average person to actually see what they want to on the internet.

[LISTEN: My list of the best business blogs you’re not reading yet – PODCAST EPISODE]

Some of the big ISPs like Cox, Time Warner, Comcast (you know, the partial list of the most hated companies in America, and that includes Wall St and the insurance AND pharma businesses, lol!) were attempting to extort money from places you know and love – like Netflix, Google and a whole host of other internet companies — by refusing to send their traffic through at a regular pace unless they ponied up more money.

So Oliver gets on his late night show and makes a big pitch to viewers to flood the FCC with calls, letters, petitions, protests, and so forth, to show the mucky mucks at the government that we like our internet free and unfettered, beyond what both we pay and these companies like Netflix are already paying for bandwidth and servers and all that good stuff.

Not making friends at the FCC back then  ;)

45,000 comments later (yes, forty five thousand people also were vocal in their desire to save net neutrality), the FCC backed down and decided not to give away the farm to the big ISPs and their GOP representatives (who have no shame in taking gobs of money from these clowns at ATT, Comcast, etc) – so we, the people, the little guys – we won that round.

[CHECK THIS OUT: $7 Digital Business Card Special from MobileWalletMarketer]

This was kind of the turning point for Tom Wheeler’s stewardship of the FCC, and personally, I really loved that guy and was SO SO SO sad to see him go when the new regime came to power.  I despise Ajit Pai, I think he’s a total sellout to the teleco’s, oh like Verizon, where he used to work.  He’s all big business, screw the little guy, all the time.  He may claim otherwise, but his record speaks for itself.

Pai is a former lawyer for Verizon who has vowed to “take a weed whacker” to regulations.

Back to John Oliver and how we are going to save net neutrality this time.

Seeing as how John Oliver has many more resources (and a great track record) for working to save net neutrality, I’m happy to report that he’s got a new website going to prod Pai and the FCC to do the right thing… again.

The FCC aren’t total clowns (although it may seem that way without Wheeler at the helm, and definitely so with Pai running running the place), and they’ve made some changes to their comments process that make it a bit more difficult to tell them what you really think…  funny how that works, the new guy says he’s for the people but now the people have a hard time telling him what he should be for because they’ve made it nearly impossible to have your voice heard.

Please head over, make your voice heard and tell the clown car driver that we’re really not looking for Verizon, ATT, TMobile, Comcast, Time Warner, Cox, Century Link, etc to rape us first on the ridiculous charges we pay to get internet that’s nowhere near as fast as they claim it is (do NOT get me started on this one) into our houses and on our mobile devices, and then make someone pay for us to see the content we want to see on our overpriced BS slow internet.

You can chime in now, or you can pay later.

And if you’re thinking to yourself, no big deal, so what if Netflix has to pay more money to them in order to show me House of Cards without buffering, they can just pay up – let’s not forget that you, the customer who wants to see House of Cards, is going to pay more to Netflix if they are getting raped by the telecoms.

Most of the telecoms are in the cable TV business, and the fact that Amazon, Netflix, Hulu and other cord cutting options are bleeding their subscription numbers like a chicken just sacrificed in some weird voodoo thing simply means they’re going to try and make more money somewhere else.  I had some choice words for the clowns at the FCC, led by Pai, deciding that ISPs could literally sell your online data and history if they could get ahold of it, since these guys are so jealous of Google, Apple, etc that they can’t even see straight.

So let’s do this – head over to the site, do your part to save net neutrality again, and we can all stay friends.

Choose Your Own Adventure

COOL STUFF FROM ME IN YOUR INBOX